What help does the Bible offer us amidst the challenges of national elections, increasing 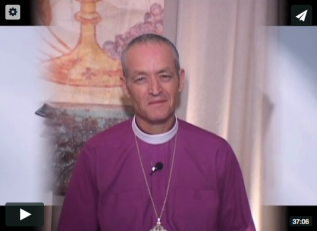 violence, and global tragedy? In Advent this year, I am releasing a four-part online video teaching series that will study the Old Testament prophecy of Habakkuk. As we look at society in Habakkuk’s time, 600 years before Christ, we find an incredible parallel to society today. Habakkuk lived at a time when society was shaken by violence. Judah and Jerusalem had sunk deeper into disobedience towards God, and the very fabric of national life had begun to fall apart at the seams.

Habakkuk lived and ministered in what was the unavoidable build up to the invasion of Judah and the ultimate destruction of Jerusalem by the Babylonians. He was deeply concerned that God’s people had violated God’s law. They had violated the first three commandments covering their responsibility to God, and the remaining seven commandments which covered their responsibility to family and neighbor (and this is one of the main reasons for the continuing relevance of Habakkuk’s message). Habakkuk begins with his situation and he ask timeless questions about the problems of evil and the character of God.

Our society today, over two and a half thousand years after Habakkuk, is being torn apart by the same thing, a violence of all kinds. The violence of war is now reproduced in a dangerously sanitized fashion in our homes through television. Not only is there going war in Syria, according to one report, but there are also over 50 wars and insurgencies being fought around the world at this present time.

Violence appears to have taken hold of so many aspects of our lives, on our streets and in our schools, making it dangerous to walk alone in both city and country areas. Teachers are sometimes in danger. Violence in the home has become widespread by husbands to wives, by parents to children. In particular, we hear increasingly frequent accounts of women being battered by their partners and children abused by adults. There is road rage, mob violence, drunkard mayhem, gang warfare, drug induced assaults.

In the United States, the suicide rate for teenage girls between the ages of 10 and 14 has tripled over the past three years. The Washington Post published an article describing sex trafficking in the United States as ‘epidemic’. The founder of the Project Meridian Foundation in Arlington, Virginia, which helps police identify traffickers and their victims, says that “no country, no race, no religion, no class and no child is immune.” He said that 1.6 million children younger than 18 [native and foreign-born] have been caught up in this country’s sex trade [1.6 million in our country].

We like Habakkuk live in a violent and broken world. But like Habakkuk we need to start where he begins in his dialogue with God and say to the Lord – amidst all the violence,

Habakkuk and his prophetic word are not regularly preached in the pulpit today. The prophecy of Habakkuk is small, it consists of only three short chapters, and it is therefore described as one of the ‘minor prophets.’

Habakkuk was a person who listened and heard the word of God and passed it on so that over two and a half thousand years later we can study and hear the word of God written. It may not be what we want to hear, but if we listen carefully, we will hear God’s voice, and in that, we will see revealed what God is doing in the face of the earth today.

And so, as the United States faces changing political leadership, as the challenges of war, famine and tragedy confront us on a daily basis, we can be confident that our God is ruling and reigning and that his purposes will ultimately be seen as good, just and upright.

“The Lord is in his holy temple; let all the earth keep silence before him” Habakkuk 2:20.