The current conflict between Israel and the Palestinian Authority continues to result in tragic loss of life on both sides of the border. Recent reports suggest that over 700 people have been killed in Gaza and more than 4,500 people injured in attacks on the strip. On the Israeli side the death toll has risen to 35 people, which consists of 32 soldiers and three civilian casualties. The UNRWA reports that over 100,000 people have been displaced by Israel’s military offensive. 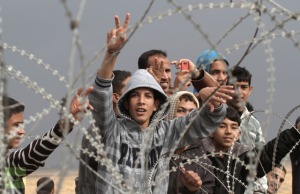 Israel has been accused of deliberately targeting health facilities including hospitals and preventing first responders from having access to injured civilians. While any loss of life is tragic and should be avoided at all costs, much of the world is led to believe that Israel is the only aggressor in this conflict and that Hamas, which governs Gaza, is innocent of perpetrating any atrocities in these current hostilities.

Little is ever reported in the Western media about the fundamental beliefs and declarations of Hamas whose charter defiantly declares that, “Israel will exist until Islam will obliterate it, just as it obliterated others before it”.[1]

It is naïve to believe that negotiations, land deals, economics and politics will bring a lasting peace in this current conflict. Palestinian Authority President Mahmoud Abbas, who now leads a unity government with the terrorist organization Hamas, clearly stated in a 2010 Jerusalem Post article that an Independent Palestine would have no room for the Jewish State, “…when a Palestinian state is established, it would have no Israeli presence in it.”[2]

The current conflict in the Middle East today is much deeper and far broader than a matter of secure and recognized boundaries for two independent states. If an independent Palestinian State is established, it will be a state governed by Islamic Law and both Jews and Christians will suffer as a result. Current developments in Iraq and Afghanistan, both countries whose US backed constitutions incorporate sharia’ law, should be sufficient evidence to sharpen our focus on the plight of minorities living under Islamic administrations. In countries where sharia’ (Islamic) law is implemented, Christian converts are severely persecuted, some face imprisonment, beatings, torture and death. Documentation to illustrate such suffering is widely available.

While political negotiations and international conversations are important, they must never become for Christians a substitute for the proclamation of the historic gospel message. Christians everywhere, locally and globally, must make the effective proclamation of Jesus Christ the only Savior of the world an urgent priority and pray that true shalom would come to Israel, the Palestinian territories and all the nations of the earth.

We have a responsibility to be involved! To Pray. To provide aid and relief. To proclaim Christ.

Jesus Christ, the Prince of Peace, is the one and only eternal solution that will bring certain peace to Israel, Gaza and a world racked with pain, violence and injustice.

Blessed is the nation whose God is the Lord, the people whom he has chosen as his heritage! Psalm 33:12.