Archbishop Ben Kwashi, a well known as a preacher and evangelist throughout Nigeria, Africa, England and the United States will be speaking at the CANA East Synod, April 30-May 2, 2015 in Wayne, Pennsylvania.

Bishop Julian Dobbs describes him as, “One of the most importa 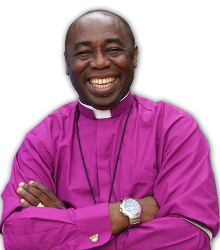 nt and courageous Christian leaders of our generation.”

Originally destined for a military career, in 1976 Archbishop Kwashi received a clear vocation to ordained ministry. He was ordained in 1982 and 10 years later became Bishop of Jos. In January 2008 he was presented as the Archbishop of Jos Province in the Church of Nigeria (Anglican Communion). He has worked in rural and urban churches, as a Polytechnic Chaplain, and at a Theological College.  In 1987 his church and vicarage were totally burned down in Christian-Muslim riots. He and his wife Gloria have six children.

Archbishop Kwashi has survived three attempts on his life. He can speak first hand of God’s grace and power, experienced in the most difficult of situations. The province of Jos covers North Eastern Nigeria, which has had numerous outbreaks of religious violence where Christians have been targeted by Islamist militants. The Archbishop has been outspoken and openly critical of the press and the authorities whenever he has witnessed lies and injustice.

Such courage has come at a price, for Archbishop Kwashi who has been personally targeted and his wife, Gloria, and son have been badly beaten. On that occasion, Gloria was dragged through the streets to the diocesan offices. She was left blind until an operation in Texas restored her sight. Almost 18 months later, as the family prepared to celebrate Gloria’s recovery, four young men arrived to kill the Archbishop, who immediately fell to his knees to pray. “Man of God, we have come for you,” they said. “This is not the time for prayer.” They took him outside but stopped to negotiate the price of his life. One of them screamed. “I’ve changed my mind. Let’s take him back inside and kill him there.” It never happened. They took what money Gloria could find and disappeared into the night. That’s something of what contending for the faith has meant for Ben and Gloria Kwashi.

All are welcome to attend Synod and meet Archbishop Kwashi.

Register for Synod at this link